In November last year Chrome overtook Firefox in market share for the first time. Part of the reason was the declining IE user base and the simplicity of the Chrome user interface, but what people don’t realise is that the release of Firefox 4 played a large part in it.
Firefox 4 was a major new release and came with a brand new Javascript engine and HTML5 parser. Unfortunately, these new features came with major memory leaks and performance bugs. The result was that if you used Firefox 4 for an extended period of time the browser would eventually become unresponsive, making it virtually unusable.
The performance bugs were either ignored, or not considered important by the Mozilla development team, so it wasn’t until the release Firefox 7 – 5 months later – that they were properly resolved. 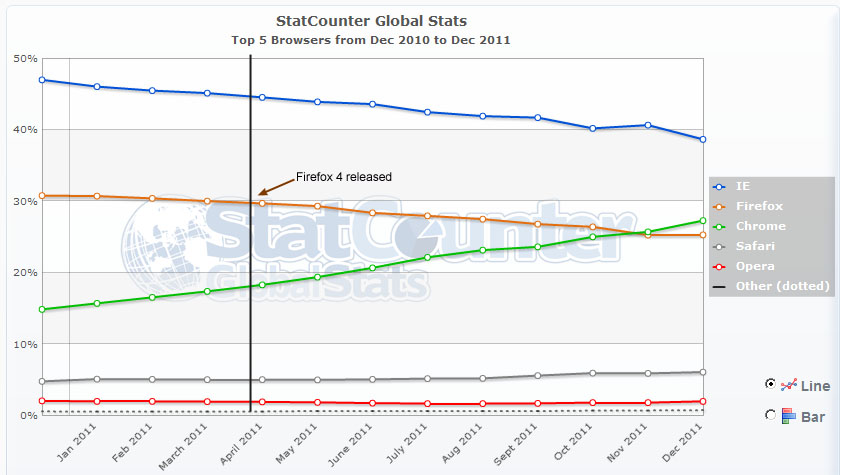 The outcome was that users switched browsers in frustration. From the graph you can see from the release of Firefox 4 at end of March there is a notable downward trend.
Ironically, Firefox 4 was being marketed as being much faster, because of it’s new Javascript engine. This made the users even more frustrated as they were experiencing the very opposite to what they were being promised and there was a loss of trust.
Eventually, the MemShrink team resolved the performance bugs introduced by Firefox 4, but by that time it was too late. Once you start a trend like this it’s very hard to reverse it. Users that switched to Chrome are unlikely to return, as Chrome offers basically the same features.

This entry was posted in Uncategorized and tagged browser wars, browsers, Chrome, firefox. Bookmark the permalink.

One Response to The real reason Firefox lost to Chrome: Firefox 4